PRINCETON DOG TRAINING CLUB
Monday/Friday
Rebecca and Gracie became a competitive force in the 8 inch class. With Rebecca, Gracie has achieved 9 MACH titles, qualified and competed (placing 11th overall in 2015) at 6 AKC Agility Nationals, and competed at the UKI US Open and won the bronze medal for the Masters Series. In addition, Rebecca & Gracie have competed at the Westminster Master Agility Championships the past three years, making finals each year and placing 3rd overall twice!

Rebecca has two young Miniature Australian Shepherds, Crickit & Gypsy, she enjoys training and playing disc (Frisbee) with. All four love to be outside hiking and enjoying nature when not competing!
​
Rebecca believes in bringing the best out of a dog by using positive reinforcement and building drive for the game, making agility fun for both you and your dog!
Tuesday
Kayla earned her AKC novice agility title in April of 1999 and completed both excellent titles eighteen months later, qualifying for the 2002 Agility Nationals where they finished 30th. Kayla earned her MACH in 2002, completed her UD a year later, and then moved full time into herding. With Kayla retired from agility and happily chasing ducks around the backyard, Diane got her first sheltie, whom the kids named Demon.

The little sable sheltie was a surprise birthday present from Diane’s husband, Richard. After a few years of training hiccups and bobbles, they quickly became a competitive force in the 16” division on the East coast. In 2009, they finished 3rd at the AKC Nationals and in 2010 they won a spot on the AKC World Team heading to Germany. With two clean rounds, they finished a solid 15th in individual medium dogs in their first international competition. In 2012, they competed in Sweden at the European Open were they qualified for both Individual and Team finals. In 2013, they again won a spot on the AKC International Team. At the European Open in Belgium, Demon and Diane put down a clean round in the medium dog Team Finals helping USA1 - Medium finish 7th. Demon retired from agility after Belgium and moved onto doing nosework.
Diane is now working with two shelties, Bazinga and Bizzy. The youngest of the team, Bizzy, finished 3rd at the US Open in 2015, qualified for the 2016 AKC Ntls and earned a spot on Team USA going to the European Open in France in July 2016. He then followed up with a spot on the 2017 EO team that went to Italy and was the medium alternate for the 2017 AKC World Team.

Working with many different breeds – Lhasas, Labradors, Lagato’s, Shelties and Border Collies – has given Diane a unique perspective on training and she has developed her skills as a competitor in multiple sports at different levels. She understands how to have fun with her dogs while competing at the highest levels.
Wednesday
Sally is also an AKC and UKI agility judge. This has given her great insight into training dogs to be able to learn the skills needed to excel in competition.

Sally currently competes with two Border Collies.  Hank is a very consistent qualifier and usually placed in the competitive 20" class in AKC.   Hank finished fifth at the AKC Nationals in 2017. Hank now competes in the 16” preferred class.   He is very close to achieving his AKC Grand Chamionship Agility title which requires a dog to be able to work in a variety of classes.   The dog must have distance, focus and the ability to perform complex sequences.   Hank obtained MACH 3, AKC agility trial championship.  Hank has shown that he can compete in other venues as well.  He has obtained champion status in both USDAA and UKI.   Over the last several years, Hank has earned byes to National events. E.V., Sally's other competition Border Collie has just started competing.

Sally has also competed with Belgian Malinois and Shetland Sheepdogs.   Past accomplishments include:
Nova (Shetland Sheepdog) achieved agility championship titles in AKC (MACH5 & PACH) and USDAA (ADCh) and she was third at the AKC National Agility Championship in 2012.  The USDAA title requires that the dog be able to perform in a variety of agility games that include distance, technical skills and the ability of the handler to plan a course that is better than the competition.
​
Bridget (Shetland Sheepdog) has achieved agility championship titles in AKC (MACH2) and USDAA (ADCh) and has tried out twice for the World Team, placed at USDAA Regional Finals in Steeplechase and Grand Prix in 2011.
​ 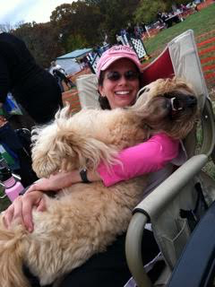 Dina Melendez fell into agility in 2006 with her Soft-Coated Wheaten Terriers and was captivated with training her dogs in dog sports. Besides agility, her dogs compete in barn hunt, nose work, tricks and are accomplished "actors". They appeared in the Emmy award-winning movie "The Normal Heart" staring Julia Roberts and Mark Ruffalo which was where her love for teaching “tricks” expanded.

​Her agility partners include MACH3 PACH "Boone", a 5-time AKC Invitational qualifier, multiple AKC Nationals qualifier and number #1 ranked SCWT 2015 & 2016 semi retired in the Preferred class as well as "Raphael", OA, OAJ, RATI, RATN.  Dina’s newest partner is SCWT "Vida" MX MXB MXJ SCN SBN SBA SCA RATN CGC TKA/ RATI, NW1, ETD.  At 2 years of age, Vida placed 4th overall in her first NW1 with a 3rd placement in Exteriors and was invited to the AKC Eukanuba Invitationals 2017 and ranked #4 SCWT in agility.  Vida also has titles in Barn Hunt and AKC Scent Work with placements, as well as Tricks Titles with AKC and DMWYD.
​
Dina’s classes focus on Beginners and Foundations level dogs and/or handlers. Her classes cover an introduction to equipment plus concepts and behaviors in incremental steps. Her approach allows teams to build a solid base. Dina strives to instill confidence in her students as they learn the tools needed to perform the necessary fundamentals. Along the way, they also develop appropriate habits. Dina's many years of teaching these behaviors helps the handler understand the aspects of positive reinforcement and behavior generalization, all while having fun!